The witness (Police Officer) was walking in a part when a flash or reflection caught his eye. Looking up, he observed a round metallic object stationary, almost directly above him. It was clearly not an aircraft.

The witness stated he watched the object intently, as he knew he may only have limited time to observe it. It was circular and metallic-looking, with three levels or shaped tiers, giving it the appearance of a hat. A large hose-like pipe was trailing from the underside of the object, which reminded the witness of a vacuum cleaner hose pipe.

The object was around the size of a bus or large truck. The witness estimated it hovered some 500 metres above the ground. The object moved off and was lost from view towards the sun’s position in the sky. A member of the public also witnessed the sighting of the object.

At the time of the reporting, the witness stated that although over ten years had passed since the sighting occurred, it has frequently crossed his mind.

No other aircraft in the sky at the time, or sounds of aircraft.

The witness was standing on his porch after finishing work late. Looking to the west (Pukekohe/Karaka/Patumahoe area), he noticed a bright yellow light, consistent with the size of a bright star, which he gauged to be 10-15 km away.

The light became stationary before moving back in the opposite direction to the west at slow speed. The witness could not hear any sound from the light, as commonly heard from aircraft on flight paths to the west with the wind blowing from that direction.

The light suddenly increased in brightness and then disappeared “as if someone had turned a light switch off.” Note: There was some cloud in the sky at the time.

The witness continued to watch the sky and shortly after the light reappeared, but not as bright as it was previously. He sat on a chair to stabilize body movement, so as to ascertain if the light was moving in relations to his surroundings. The light moved east, became stationary briefly, then moved west at a slower speed over a period of 5 – 10 minutes. The intensity of light remained consistent. The light made another turn and moved slowly south.

After observing the light for a total of 25-30 minutes, the witness saw it “switch off” again (or go behind a cloud).

The witness is familiar with local aircraft flight paths and stated he had never seen an aircraft in that particular direction or area, and had never observed an aircraft move in this manner. The light was moving over a distance at a lower altitude that commercial aircraft on flight paths further northwest.

Several witnesses (three adults and children) noticed an A300 jet passing over their house. The reporting witness, a Police Officer, stated the aircraft was lower than they normally are on this flight path, but it is not uncommon. What caught the witness’s attention initially was that the jet was fully lit up, all landing lights under the fuselage were illuminated and they commented they had never seen an aircraft lit up like this before when passing over their house. It did not have its landing gear down as it was climbing in altitude.

The witnesses then noticed a large bright orange light/object heading straight towards the right-hand underside of the aircraft, and it looked as if the two would collide. The orange light/object passed underneath the jet at an estimated altitude of around 500 feet and continued in its easterly direction at a constant speed, while the jet kept climbing. The jet was traveling west to east, having departed Auckland airport, and the light/object was on a more north-westerly to east path.

The orange light/object was intensely bright, and maintained a constant direction and altitude. The reporting witness stated he is used to aircraft from the airport passing overhead and is very familiar with the Eagle helicopter, and knows different aircraft by the distinctive sounds they make. This light/object made no sound. The light/object appeared to be disc shaped, but its brightness made this hard to determine whether it was an orb or disc.

The witness estimated the speed of the light/object to be approximately 50km/hr and it took some time before it passed out of view. After about 3 minutes the light increased in speed and went out of sight over the New Lynn area.

The witness estimated the light/object was approximately 3-4 meters wide, which he estimated by comparing its size against the fuselage of the aircraft. It was larger than a helicopter.

The witness stated: “I keep replaying in my mind why the A30 aircraft was so illuminated at the time, as this was very unusual. I wondered whether this was because the brightness of the object had eliminated the underside of the aircraft, or whether the aircraft had put all its exterior lights on as they had seen the object was nearing them and they were attempting to light up the fuselage so the object would avoid a collusion. The (low) altitude of an aircraft this size also surprised me and I thought maybe it had altered it’s trajectory to avoid a collusion. I do not know, this is just a theory, and I’m still blown away by what we saw.”

This is an excerpt from an article printed in the Blenheim Marlborough Express, just 4 days after the ‘Kaikoura lights’ sightings over Cooks Strait, Marlborough and the Kaikoura coast, December/January 1978 -79.

One of the ‘Kaikoura lights’ photographed over Cooks Strait 1978/9

A well-known astronomer, Mr John Morgan, of Renwick, feels “a wee bit uptight about people who explain the UFO sightings as Venus and weather phenomena.”

“I am an assistant director of the New Zealand Astronomical Society, and I watch great chunks of sky,” he told The Express today.

“I have a special interest in meteors and when observing am not concentrating on one star, but on about one-third of the night sky.”

“The Clarence Bridge sightings are UFOs. I have seen them myself four times. They were similar to the object shown on the Australian television film.”

Mr Morgan particularly remembers his first sighting. That was on March 10, 1972.

“I have seen two or three since. The first was about four miles away over the Wairau Valley. It was a yellow sphere, and it was tracking a small aircraft, a Cessna or some such plane. I watched it for five minutes. It was at a height of about 500 m. The time of the observation was 8.35 pm.”

The local liaison officer for the Carter Observatory, Mr Roger North, confirms one of the sightings. He was with Mr Morgan at the time.
“It was a bright light. We could not explain what it was.”

This is an excerpt from an article entitled ‘Astronomer discounts Venus and weather’ printed in the Blenheim Marlborough Express, just 4 days after the ‘Kaikoura lights’ sightings over Cooks Strait, Marlborough and the Kaikoura coast, December/January 1978 -79. It continues on from the excerpt above.

“The local liaison officer for the Carter Observatory, Mr Roger North, confirms one of the sightings. He was with Mr Morgan at the time.
“It was a bright light. We could not explain what it was.”

Just before Christmas, Mr North learned of an incident along the highway near Ward. A motorcyclist was riding home to Ward from Blenheim when he was followed by a bright light in the sky above and behind him.

“He was pretty scared. In fact, he was petrified and rode home as quickly as he could. We don’t know what it was.”
Mr North suggested that the present spate of sightings might be a “dimensional thing.” Though it sounded like science fiction, dimensional travel could be a possibility. Could the area off Clarence be a dimensional window?

Meanwhile, the Carter Observatory on Black Birch has been unmanned during the Christmas and New Year holidays and, consequently, during the times Wellington radar and Argosy pilots recorded and saw unexplained echoes and lights.

The Observatory extends a bird’s eye view of the Marlborough east coast where the initial and consequent sightings of lights and objects have been made.
Today a Victoria University lecturer, Mr J. Troddle, will move in at the Observatory with some sophisticated equipment to observe an occultation of a star by the moon.

Mr North says that he will ask Mr Troddle to keep an eye out for anything unusual.

Mr North does not discount the existence of UFOs. An amateur astronomer himself, with a special interest in the Magellan Clouds, he has observed several explainable objects in the night sky over the years. 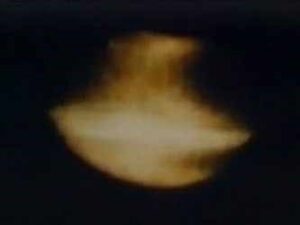 Photographic image of the famous ‘Kaikoura lights’ of 1978 taken from onboard the Argosy aircraft. These images were at first identified as the planet Venus by a number of astronomers, and this perspective was quickly adopted by the press and relayed to the public. However this was later proved to be incorrect, as Venus had not yet risen at the time the photos were taken. The pilots were experienced professionals who were well aware the light they were observing was not Venus.