Mr. Aronsen had been a pilot for 13 years and was a former traffic officer.

The pilot was on a short flight in the vicinity of Temuka when he observed a UAP.  He was aware of an F27 (Fokker Friendship) transport aircraft in the area inbound to Christchurch Airport. 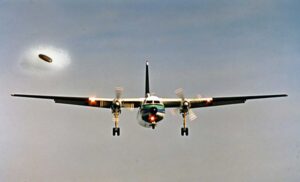 The pilot was at an altitude of approximately 7,500 feet AMSL.  He was aware of an F27 (Fokker Friendship) transport aircraft inbound to Christchurch Airport, and had heard the local air traffic service advise the F27, that a Cessna 180 was northbound in the area.  He could see the F27 on long finals about 5 miles northwest of Temuka, at an estimated altitude of 2,000 feet, about 1 mile west of his position.

His attention was captured by what he at first thought to be the C180 in close proximity to the F27.  However, upon closer observation he realized the F27 was being followed by a UAP that was positioned to the starboard rear and slightly above the F27 at a distance of approximately 400 metres.  It was maintaining position.

From the pilot’s angle of observation, the UAP was approximately 30 degrees below from 7,500 feet AMSL.  He estimated the object was at an altitude of 1,800 to 2,000 feet.

Pilot Aronsen stated he observed a black cigar-shaped object about 10 to 15 metres in length.  It was enveloped in a ‘heat haze’ (shimmering air).  The pilot’s drawing shows an object slightly more oval than cigar-shaped, bisected by a horizontal flange or ring.

Aronsen estimated the UAP was travelling at approximately 110 kmh (then later to an unknown speed).

Upon realizing the UAP was not a conventional aircraft the pilot turned his PA 28 towards the object and commenced a dive to intercept it. He reached maximum airframe speed in doing so.

At this point the UAP stopped dead and hovered for approximately 2 seconds, before reversing its course when the pilot began his dive to investigate.  It then accelerated sharply away on a heading of approximately 290° magnetic.  The rate of climb and acceleration was far in excess of anything the pilot had seen before, and the object was lost to sight in about five seconds.

The crew of the F27 would not have been aware of the presence of the UAP.

The pilot stated that in his 13 years of part-time flying he had never seen anything to compare with it.  At the time, he was startled to see a transport aircraft being followed by a UAP, but he elected to remain silent at the time due to “lack of evidence.”

This report is interesting considering that the following year on December 31 1978/January 1 1979, a UAP appeared to approach close enough to an Argosy aircraft that their ‘blips’ merged on Wellington International Airport ATC radar screens.  It is also interesting to note the comparison that when the Argosy was approaching Christchurch airport, a UAP followed it in and overshot the runway. (These incidents were part of the ‘Kaikoura lights’ events).

The pilot’s diagram of the incident shows the UAP stopped before reversing its course and leaving at an extreme unknown speed.  This would not be the flight characteristic of a conventional aircraft.

The UAP observed by pilot Aronsen was within normal flight altitudes near an international airport, had mass, and was clearly visible to the PA 28 pilot.  The movement, position and location of the UAP posed a potential hazard to the F27, as well as other aircraft in the area of Christchurch International Airport.