When a farmer prepares to bring her dairy herd in for milking, she encounters a circular object with occupants on board.

On 13 July 1959 at 5.30 am Mrs Eileen Moreland was walking across a flat paddock to bring in the small herd of cows for milking. The paddock where the cows were, was surrounded by trees After turning on the milking shed light, Mrs Moreland set off across the paddock, torch in hand, to collect the cows. She was well-clad as the morning was cold and there was a thick layer of cloud over the district at an estimated height of 2,000 feet. Half-way across the paddock, some 50 yards from the shed, she noticed an unusual green glow, emanating from the cloud above and bathing the area in a ghastly light. She stopped and looked directly upwards, thinking that it could not be the moon, as it was in the wrong place.Then suddenly, two green lights, “like eyes”, appeared through the clouds, circled by a band of orange lights. All about her the ground was illuminated by the sickly-green light, and, looking at herself and her hands, she saw that she too was bathed in this green glow.

Feeling that she did not want to stay put, she bolted for the pinus radiata trees bordering the paddock. The cows could be seen plainly in the light and she ran among them and stood against the trunk of one of the pine trees. Turning around from the shelter of the trees, she saw a flatish, saucer-shaped object slowly descending from about 50 feet above the ground. It stopped it’s smooth descent some 30 feet above the ground and hovered about 15 feet above a group of peach trees (10-15 feet high.)The ratio of height to width of the object was about 1:3 – it was between 7 ½ – 8 ft high and some 20 – 25 feet across. There were two circumferential rows of orange-green ‘jets’ set into bands at the top and bottom of the main body of the object. The jets were brilliant orange in colour, with greenish centers, and faded to the outside, through orange to yellow. They made a faint hissing noise and were located on metallic bands about 1 ½ feet in towards the center from the upper and lower edges of the object. (If the bands had been 2 ft wide, say, there would have been about 1 ½ ft between the two – the total depth of this arrangement being about 4 ½, possibly 5 ft.) 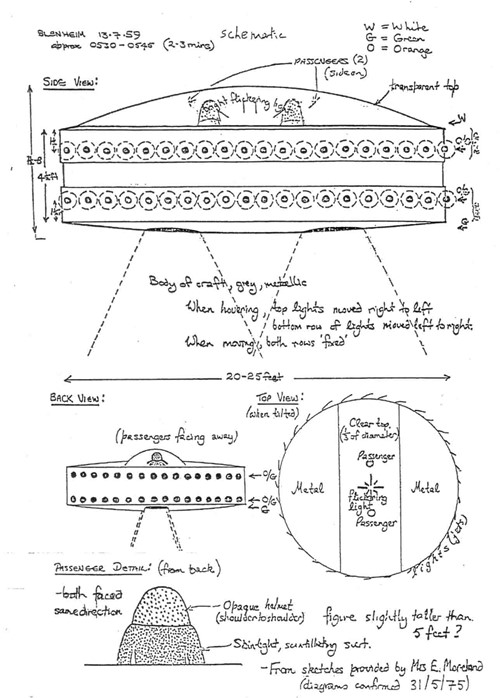 The motionless object hovered some 30 feet above the ground, about 40 yards out in the center of the paddock, and was perfectly visible. On stopping, the jets immediately shut off and reappeared, at a slight angle. Each band of jets then began to counter-rotate at high speed, the top band from right to left and the bottom from left to right. The speed became so great that the bands of light became continuous, “like halos”. There was none of the ‘revving-up’ noise associated with a car or plane engine, but a loud humming could be heard, and the noise of the ‘jets’ hissing.Mrs Moreland became apprehensive when she noticed that the object was occupied. There was a clear, glassy dome-like structure on top, filled with a pure white light, the source of which was not visible itself, but seemed to arise from the center of the object. She could see two figures seated, one behind the other and facing the same way, a little over an arm’s length apart. The two figures were dressed in almost skin-tight metallic-looking suits that crinkled and creased with each movement, and reflected the light. The ‘man’ at the rear suddenly stood up and leaned forward on his hands, and appeared to be observing something between himself and the figure in front – possibly the brightly flickering light source. Mrs Moreland thought that he must be a little over 5 feet in height, but she could not make out any facial characteristics as he was not facing in her direction, and the large silvered helmet covered from shoulder to shoulder. The rear figure then sank back to his former position – the front figure remained motionless throughout the period of observation.

The object then tilted slightly, the bands of jets stopped whirling and went out, then back on again without rotation. There was a loud ‘whoosh’ of air and the object rose vertically (the body still at a slight angle) and vanished into the cloud at tremendous speed. This movement was accompanied by a high-pitched whine – “The screech was almost unbearable”, the movement “unbelievably fast”. A moment or two later a wave of warm air reached Mrs Moreland, and there was a strange hot pepper smell of ozone.

After several more moments, Mrs Moreland “pulled herself together”, and collected the cows, which had been little affected by the episode (one or two did get up), and drove them to the yard. At this point she heard the town clock striking a quarter to six, “so the visit could not have lasted longer than two or three minutes, though it seemed ages.”

The milking was completed as usual, and the milk left at the gate, before Mrs Moreland flew inside with her account. Her family was soon awake, and her husband, a member of the Royal New Zealand Air Force based at Woodbourne nearby, told her she should ring the police. Although a little reluctant to do this at first, (she thought no-one would believe her), she did telephone and said that they seemed to be interested. Her husband notified the Woodbourne authorities, who took the story seriously.

Mrs Moreland was questioned by Air Force personnel who visited the area. Furthermore, they indicated that residual radiation had been detected where the object was seen.Brown pigmented areas developed on her face, and she referred these conditions to her doctor. The brown patches on her face persisted – the last blotch, over her right eyebrow, washed off some six years afterwards.An account of Mrs Moreland’s experiences made its way into the papers and created such interest that their farm was plagued by hordes of inquisitive sightseers. People wandered all over the property, uninvited, leaving gates open, upsetting the cows and generally creating such a nuisance that, should either of the Morelands see another object, they would prefer to just ‘shut up’ about it.Later on, it was noticed that the row of fruit trees beneath the position where the UFO had hovered, died and had to be pulled out. However, grass in the vicinity grew at a much faster rate, was several times taller and much greener than grass elsewhere.

Mrs Moreland underwent a series of audiotone readings in Wellington, supervised by Air Force personnel, to determine the noise levels of the object. These placed hovering noise at 15,000 cycles, and climbing noise (a high-pitched scream) at 150,000 cycles. The ‘Moreland UFO’ remains a classic case in UFO lore. Enquiries still come in about it from all over the world.Mrs Moreland spoke to Professors McDonald and Hynek during their respective visits to this country – both were very impressed by her account of the incident.

Locally, the Moreland UFO raised questions against the Adamski approach to UFOs (still the most fashionable influence to ufologists in NZ during 1959), which were not readily answerable.

(“The Moreland material is particularly important and interesting. The case directly contributed to the collapse of the Adamski groups throughout New Zealand because what Mrs Moreland saw was nothing like the Venusian or Saturnian spacecraft promoted by Adamski. The case was widely re-reported in overseas UFO newsletters.” – B. Dickeson, 2006.)

(This account of the Moreland sighting written by F & P Dickeson, diagrams by Mr B. Dickeson, is posted on UFOCUS NZ with the kind permission of Mrs P. Dickeson and Mr B. Dickeson. It appeared in the NZSSR group newsletter in 1959, and also in Xenolog 100, Sept-Oct 1975.)
Blenheim, New Zealand.